There’s no doubt that barbecue reigns king in Texas– and if you haven’t experienced it first hand, then you basically haven’t been living. But there’s no need to make a pilgrimage down to Central Texas’ barbecue belt to get your ‘cue fix on when you can find some choice contenders right here in the metroplex.

First up is Pecan Lodge, a veritable temple to wood-fired meats that’s known as much for its lines as it is for its mind-blowing barbecue.

Talk about lines, there’s always one outside of CattleAck BBQ, a hole-in-the-wall joint that’s only open for a few hours, two days a week. And it’s not just Texas-style barbecue that’s been making a strong showing– 18th and Vine serves up a taste of Kansas City in the form of succulent ribs and drool-worthy burnt ends.

If all these places are whetting your appetite, then keep reading to find out about more sizzling barbecue hot-spots to try out right now. 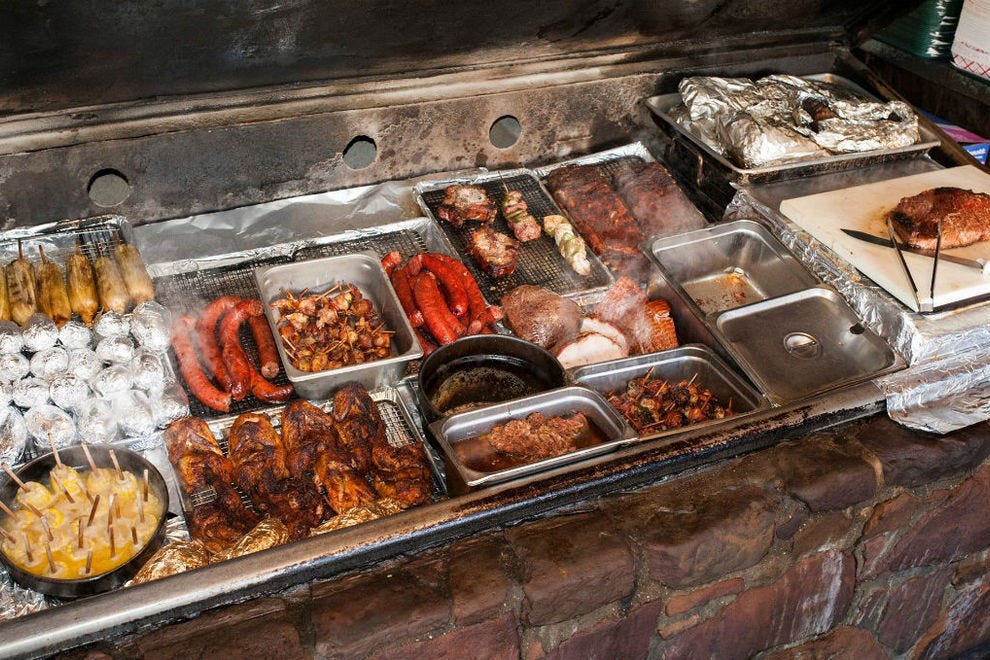 It’s always a good sign when you can smell a barbecue joint before you even get out of your car, and that is part of the draw at this sprawling family-run operation. The other part, of course, is the ‘cue, which is ordered directly from the pits outside the door. Choose from brisket, ribs, sausage, kabobs, chicken, pulled pork and more, then head inside to a cafeteria-style line to load up on sides like fried okra, cornbread salad and mac & cheese. And while the barbecue is terrific, the 16-ounce ribeye steak (served with two sides for $27.50) is even better. The free pinto beans aren’t too shabby, either. 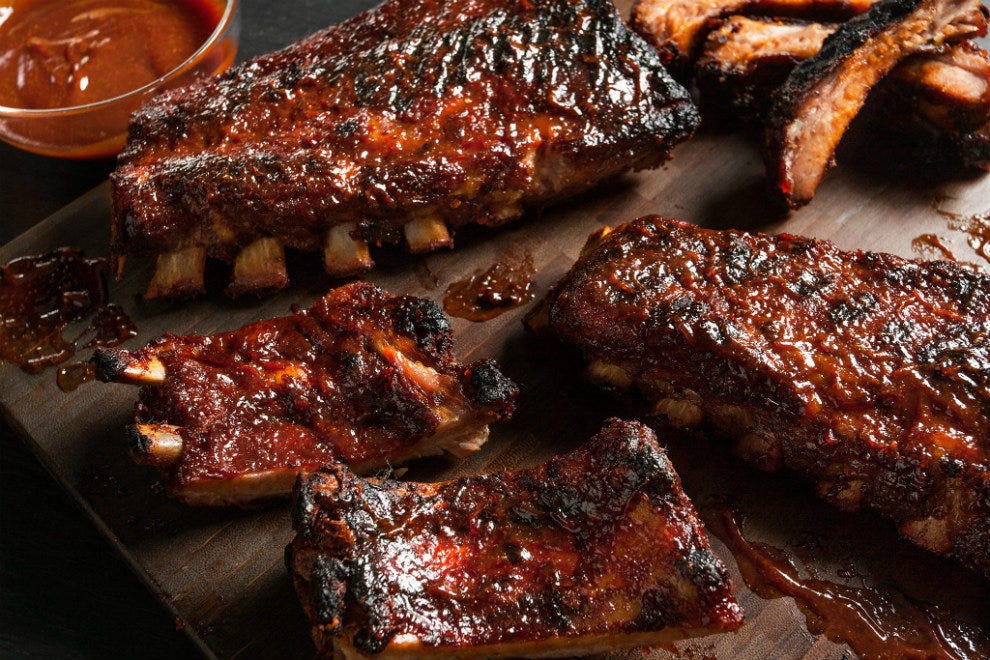 Back in action after a devastating fire in 2017, this family-owned joint has been doling out hickory smoked barbecue to legions of fans for over thirty years. Tender, slow-cooked brisket and plump, juicy ribs are the most popular dishes, but you’ll also find a variety of house-made sausages, spit-roasted chicken, ham, turkey, and sides like collard greens and loaded baked potatoes. Don’t overlook the fried catfish and old-fashioned burgers, either. Also worth seeking out are the daily specials, which include everything from meatloaf to turkey & dressing. As for dessert? Three words: Butter Bomb Cake. 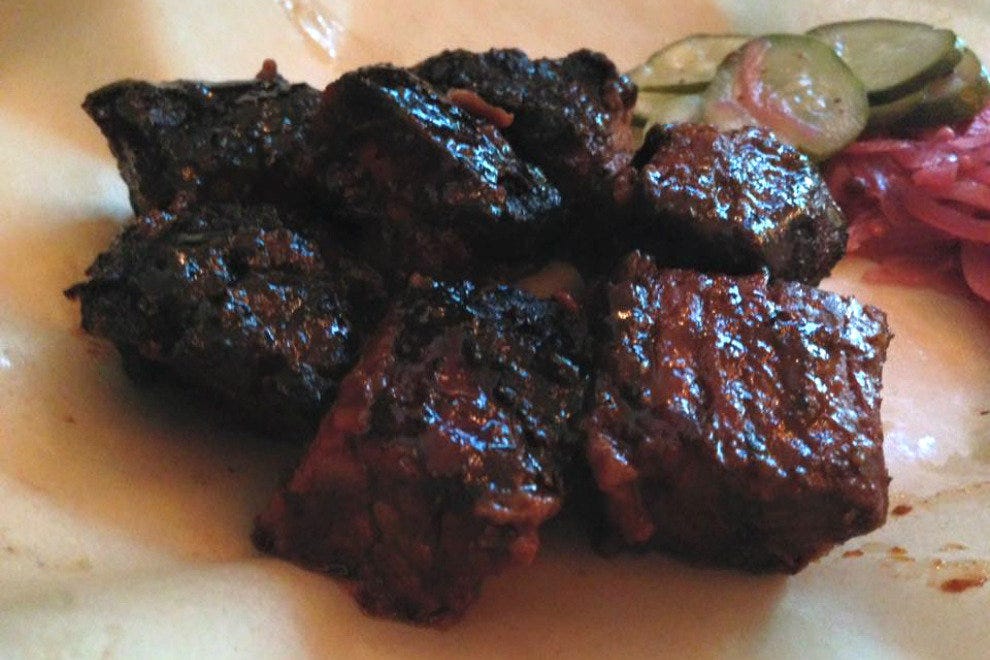 This decidedly upscale Oak Lawn meat palace not only specializes in Kansas City-style barbecue (think sweet-glazed ribs and crusty burnt ends) but it also serves up an assortment of chef-created dishes such as grilled salmon, smoked cauliflower steak and pepperoni flatbread. And it doesn’t stop there. Also expect to chow down on everything from burnt ends queso dip and brisket grilled cheese sandwiches to some of the best fried okra you’ll probably ever try. Pair it all up with a spicy craft cocktail like the Mexicutioner, with Cimarron Tequila, mezcal, jalapeno and pineapple. Save space for the fried apple pies. 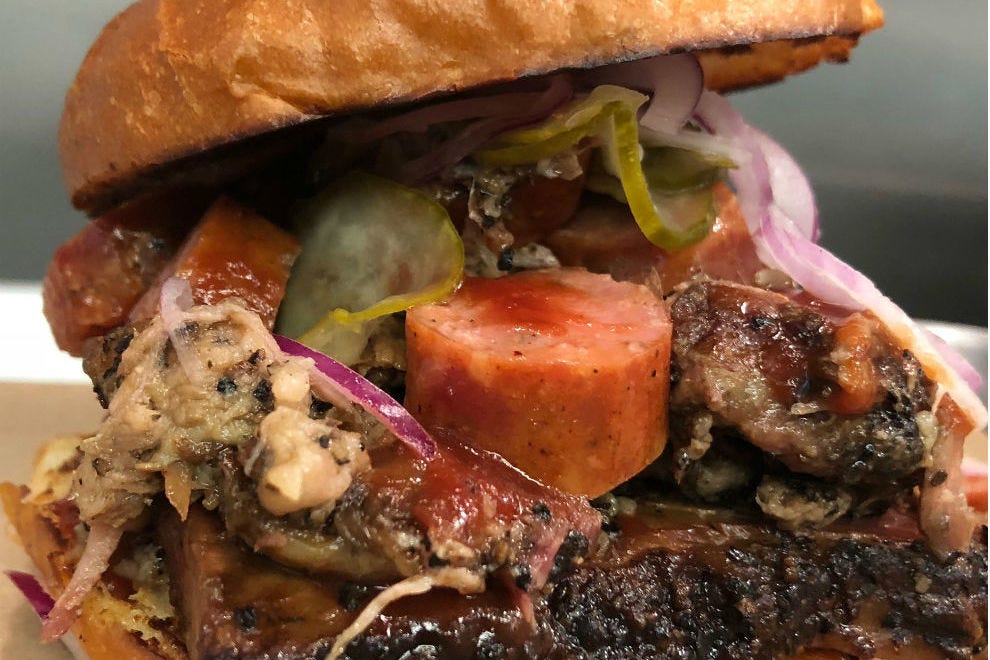 Photo courtesy of One90 Smoked Meats

Named for the ideal internal temperature of a perfectly smoked brisket, this popular East Dallas spot offers some of best small-batch craft smoked meats in town. In fact, it’s received numerous accolades over the few years it has been open, and it’s even been featured on Food Network’s Diners, Drive-Ins and Dives. As for the goods: all proteins (salmon, brisket, duck, bison, sausages, chicken and more) are smoked with pecan and oak, and served up in traditional combo plates as well as in tacos, salads and sandwiches. Must-haves include the DLT (duck, lettuce, and tomato) sandwich with cherry jalapeño sauce, and brisket tacos. Bonus: they also sell smoked meat to-go in vacuum-sealed pouches for easy preparation at home. 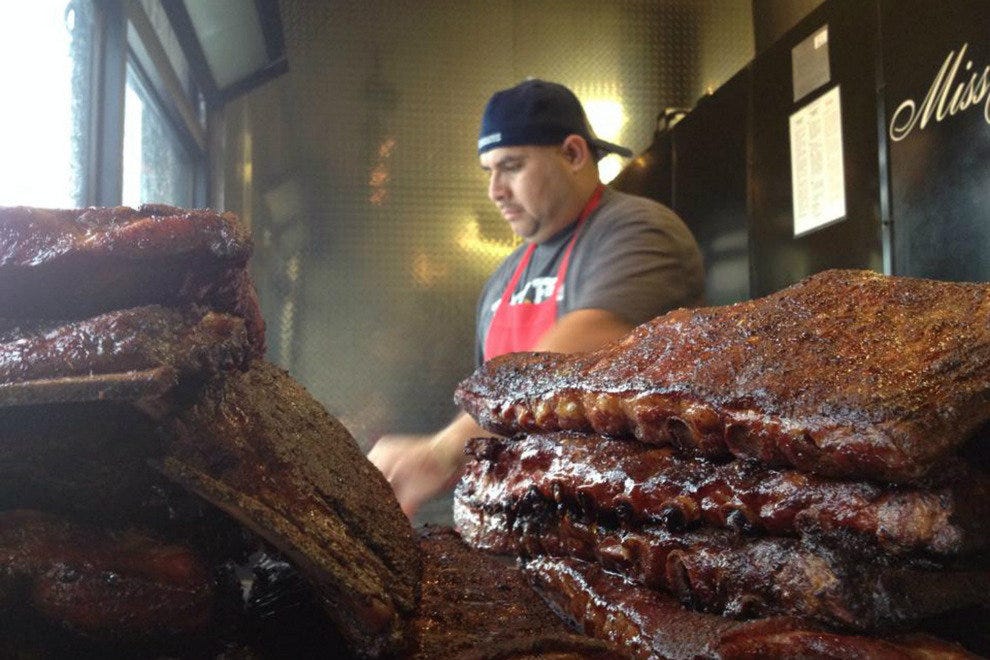 Photo courtesy of The Slow Bone

This cafeteria-style (lunch only) joint in the Design District dishes up some serious barbecue, where options run the gamut from hickory-smoked chicken to sausages, pork ribs and brisket. And while Slow Bone might be best known for barbecue, you’d be hard-pressed to pass up on some of the other specialties, like Frito pie and a smoked pork chop that takes 3 weeks to make. Sides are a big focus here, too, and their Brussels sprouts-cauliflower gratin is a must. Oh, and did we mention they churn out some of the best fried chicken in town? Whatever you order, don’t skip the cornbread pudding. Expect a line, so get here early before they run out.

OFF THE BONE BARBEQUE 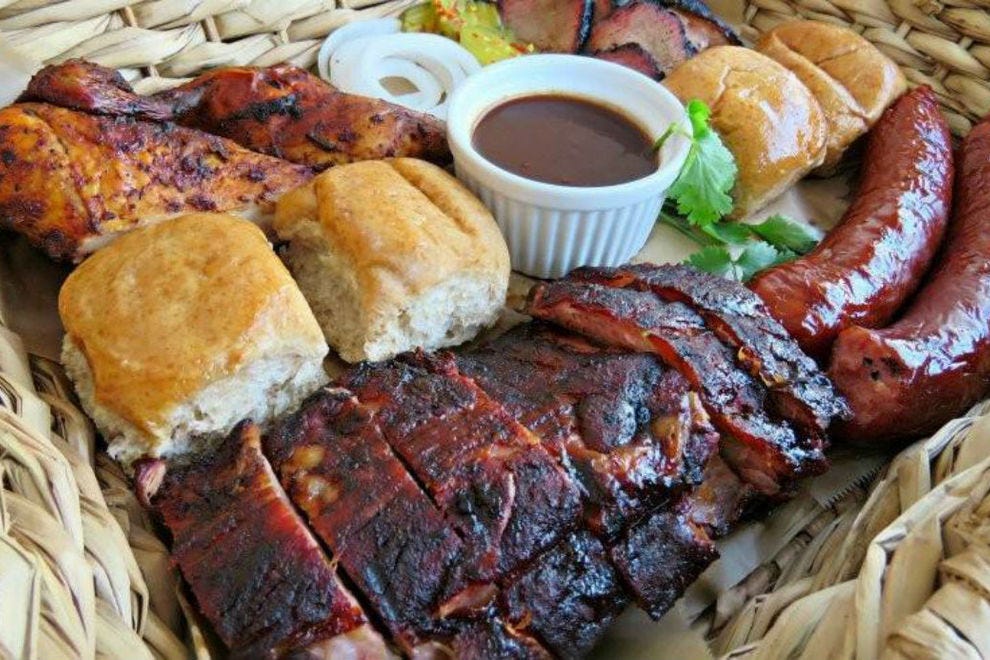 Photo courtesy of Off the Bone Barbeque

Set up in a former gas station on the south side of downtown, this family-run joint is a veritable place of pilgrimage for baby back rib devotees. Owner and pitmaster Dwight Harvey slow smokes them over pecan wood for about five hours and then cooks them an additional hour with a coating of sauce, resulting in deliciously tender ribs that literally fall off the bone. But it’s not only ribs that command attention, the brisket, coated in a sweet-spicy rub and pit-smoked for fourteen hours, is a solid choice too. Go all out with one of the combo platters which include sides like spicy charro beans, blue cheese and bacon coleslaw, and deep-fried corn on the cob. 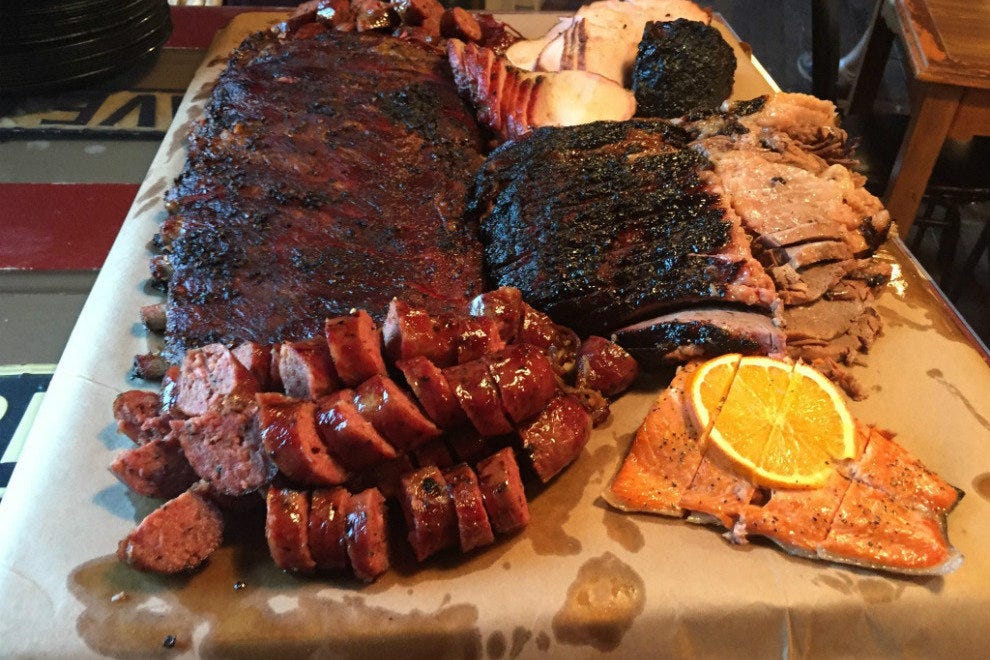 Named after the official barbecue capital of Texas, this popular Bishop Arts smokehouse serves, what many locals consider, the most authentic Central Texas-style barbecue in town. Which is no surprise since co-owner Jill Bergus happens to be a member of the family who owns the legendary Kreuz Market in Lockhart. In fact, several of Kreuz Market’s specialties show up on the menu here, including their famous sausages, and a special cut of beef known as shoulder clod. Rounding out the offerings are spareribs, pork chops, smoked turkey, chicken, and of course, brisket. Not sure about what to order? No worries they’ll let you sample the goods before you decide. 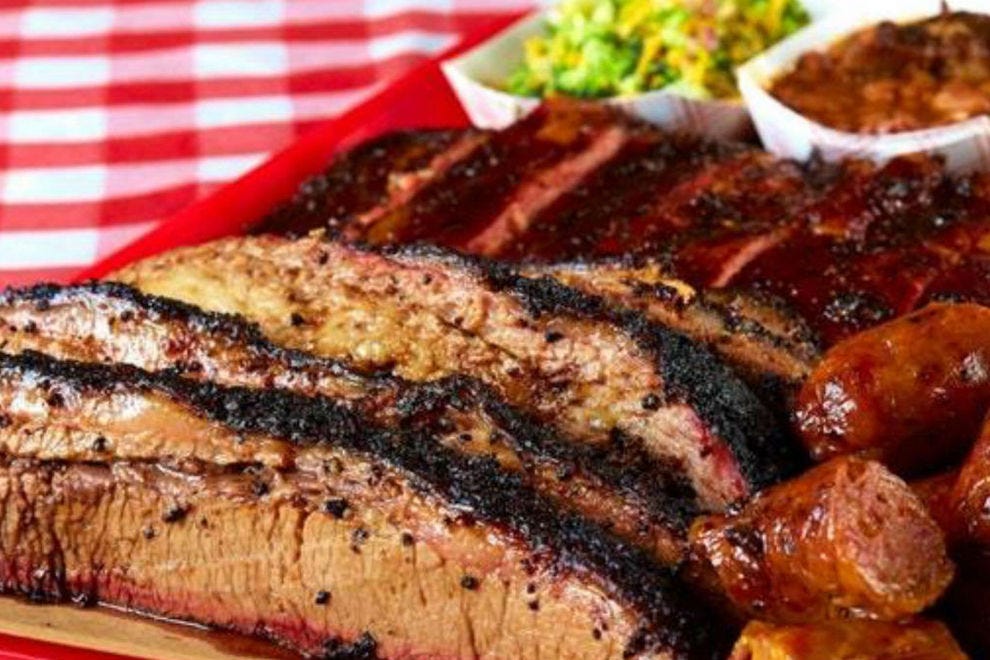 Regardless of which location you go to (Frisco or McKinney), trying to get a table at this family-run smoked meat mecca usually involves a little patience. Which should come as no surprise since this place ranks as one of the top BBQ joints in the state. The brisket might be the biggest seller here, but don’t sleep on their slow-smoked St. Louis-style spareribs, pulled pork and jalapeno sausages. Pair it all up with stellar sides such as mac & cheese, fried okra and brisket laden pinto beans. Head here on the weekend when you can also chow down on their “Texas twinkies” (brisket and cream cheese stuffed jalapeño poppers wrapped in bacon). 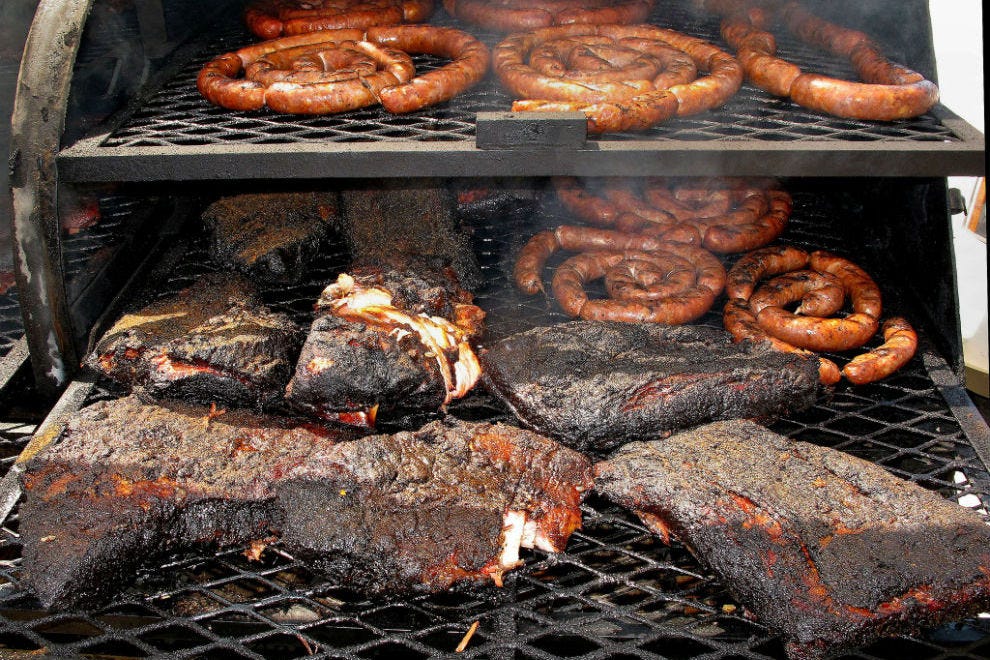 Featured on such shows as Food Network’s Diners, Drive-Ins and Dives and Man Fire Food, this Deep Ellum hot spot is as famous for its long lines as it is for its epic barbecue. But as they say, good things come to those who wait, and those good things include house-made sausages, mesquite smoked brisket, mouthwatering ribs and more. Try it all by ordering “The Trough,” where for around $79 you and four of your pals can dig into beef ribs, pork ribs, brisket, pulled pork and sausage links. Other winning items include fried chicken and a brisket and chipotle cream cheese stuffed sweet potato dubbed the “Hot Mess.” Don’t get us started on the peach cobbler. 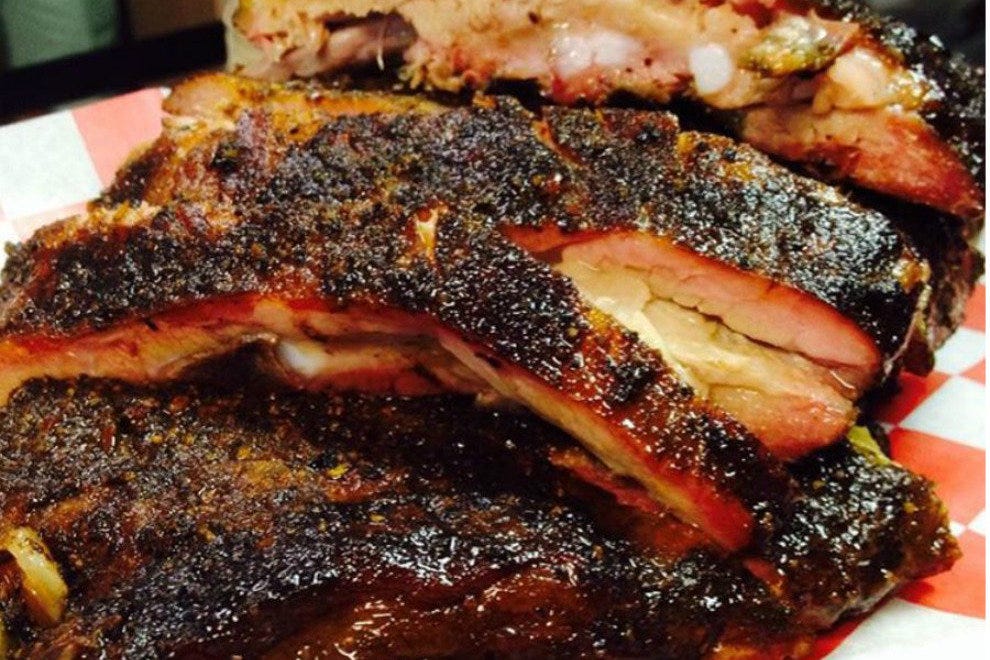 Just getting into this cult destination can feel like cause for celebration. After all, it’s ranked the third best barbecue joint (according to Texas Monthly) in the state. So as expected, you’ll most certainly encounter a line. And oh yeah, the place is only open from 10:30 a.m. to 2 p.m. on Thursdays, Fridays and the first Saturday of the month. But for those looking for smoked meat nirvana, this is the place. The pork ribs are massive, the smoked ribeyes are perfection, and the intensely marbled Akaushi beef brisket is the stuff barbecue dreams are made of. Other standouts include pastrami burnt ends (when they have them), and a signature sandwich called the Toddfather, made with a trifecta of brisket, pulled pork and hot link sausage. Don’t skip dessert, the crack cake is wicked.